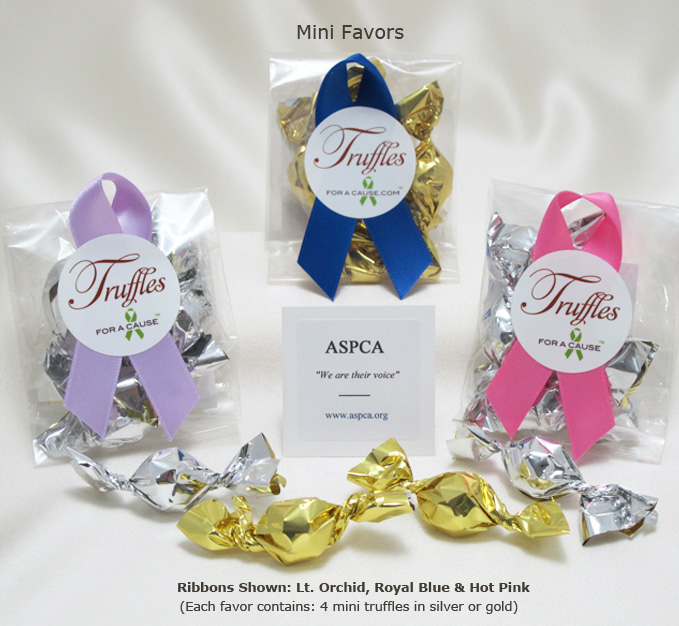 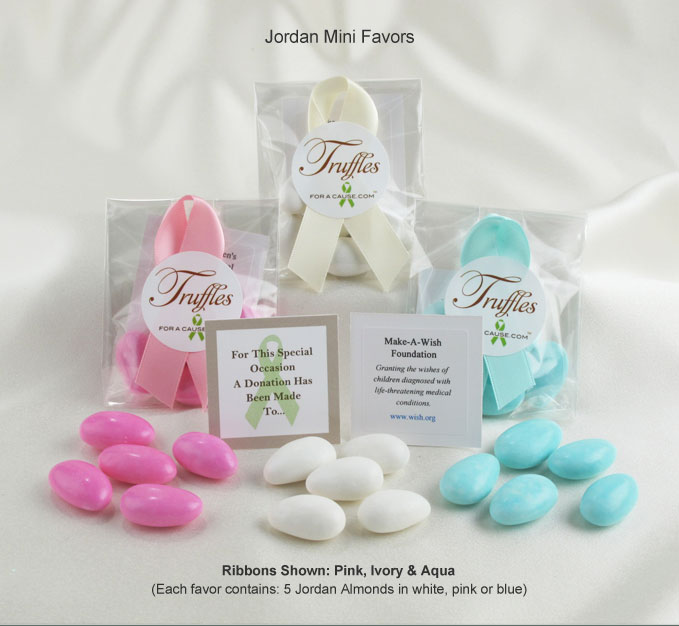 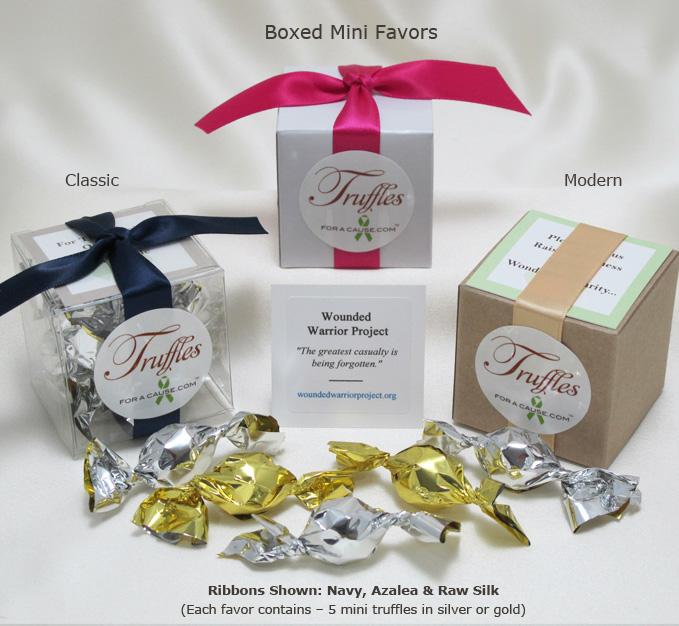 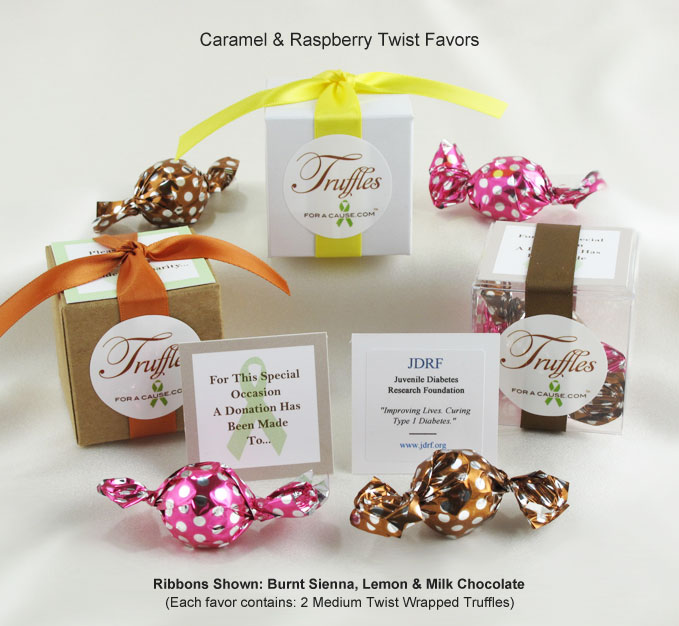 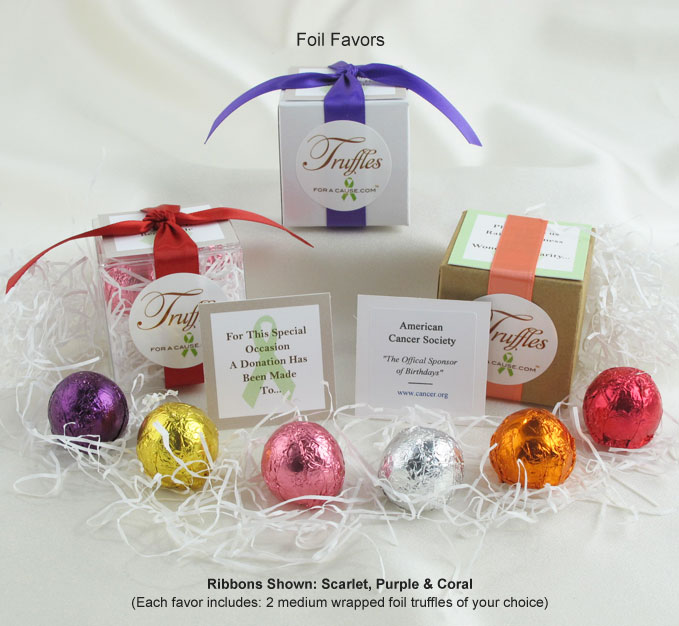 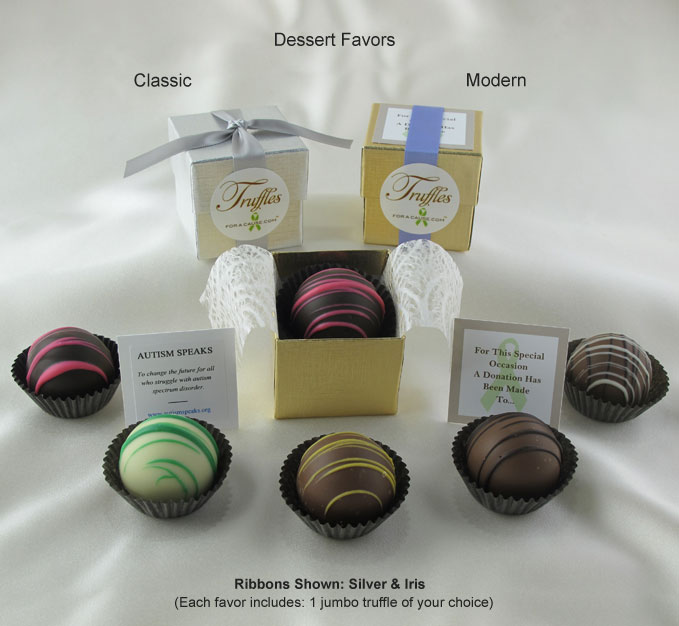 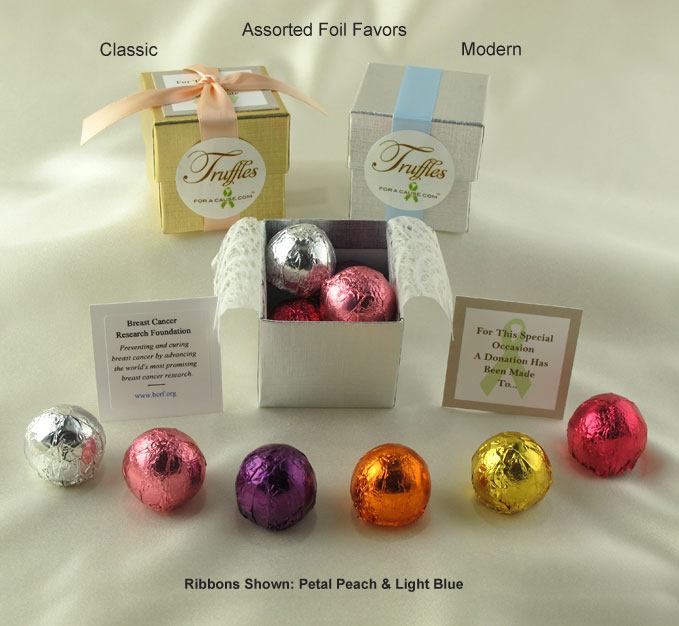 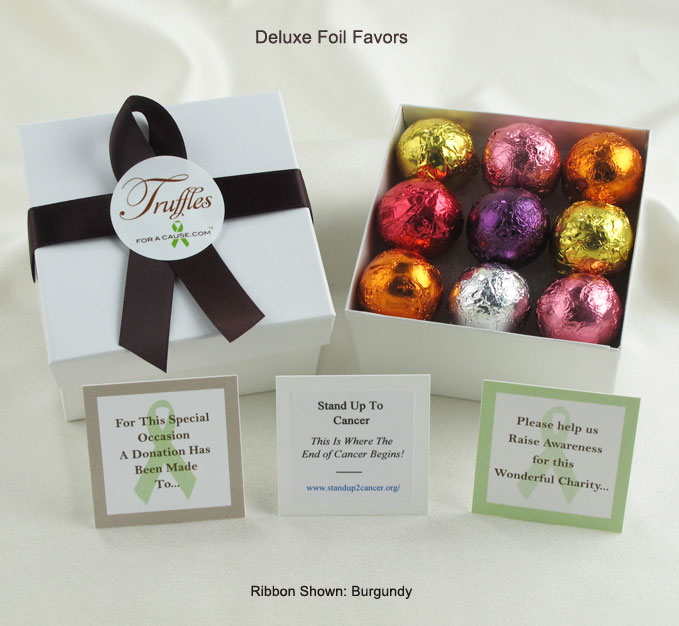 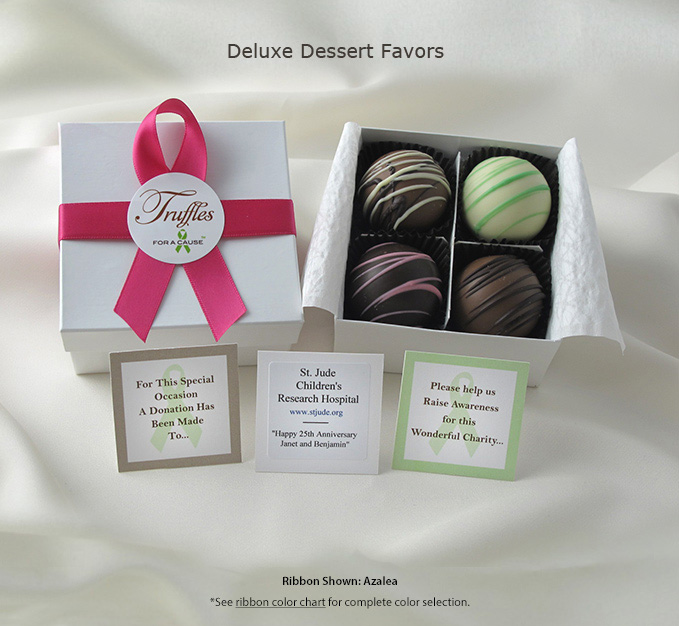 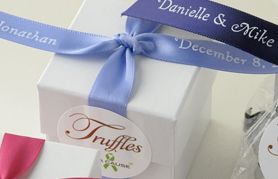 You also have the option of Personalized Favors. We're happy to customize your favors even further by printing your first names and wedding date on each favor ribbon. Pricing is listed for each favor. 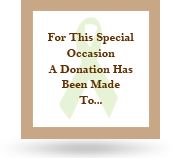 We make a donation. We donate a portion of the proceeds from each of our chocolate favors to the charity of your choice. The donation amounts are listed with each favor. We forward the charity donation receipts to you as we receive them. The opposite side of the charity card will show your charity(s), its website and any personal mentions - limit 130 characters/spaces.

You make the donation. This less expensive version of our chocolate favors allows you to make a donation of any amount (small or large), to the charity of your choice.The opposite side of the charity card will show your charity(s), its website and any personal mentions - limit 130 characters/spaces. *This option will allow you to qualify for a tax deduction. 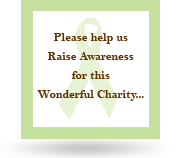 Option 3 – No Donation / Awareness Only

There is no donation. This version of our chocolate favors is for occasions where a donation is not desired or necessary because raising awareness about your cause is the main focus. Perfect for corporate fund raising events, yet still appropriate for any event. The opposite side of the charity card will show your charity(s), its website and any personal mentions - limit 130 characters/spaces. 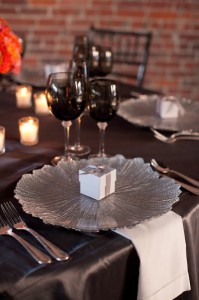 Our company provides a wide selection of chocolate wedding favors (both assembled and DIY versions of the same), and combines them with a charitable wedding donation. We thought that we would do a little digging and research and write a brief history on the subject of wedding favors, so here goes…

Wedding favors are small gifts given as a gesture of appreciation or gratitude to guests from the bride and groom during a wedding ceremony or a wedding reception. The tradition of distributing wedding favors is a very old one. The very earliest accounts of wedding favors was the practice of couples giving love knots constructed from lace and ribbon to wedding guests to represent their union and love. It is also said that back in the 16th century (or so), wedding favors from the well-to-do in Europe were small ornate boxes. These boxes were given to their guests (to take home), as a gesture of appreciation for coming and sharing the festive day of celebration with the newly wed bride and groom. The small boxes they gave were called bonbonnieres which came from the french word bonbon (a general term for sweets or candy), and usually the box contained sugar cubes or candy. Back then, sugar was expensive and hard to get so it makes sense that these favors (that’s what we call them - they called them bonbonnieres), were an upper class privilege because they symbolized wealth and royalty.

As time went by and as European trade routes became more plentiful the price of sugar came down. The tradition of giving favors at weddings was adopted by folks of lesser means, in fact the giving of wedding favors was practiced by almost everyone who invited guests to their wedding. The giving of favors changed and from ornate boxes filled with bonbon candy to more simpler (actually more meaningful), sugar coated almonds. These sugar coated almonds today are commonly known as Jordon Almonds. The combination of the almond and candy signify the bitter sweetness of marriage and are still popular at some Italian, Greek and Middle Eastern weddings. Traditionally 5 almonds are given which represent health, wealth, happiness, fertility and longevity.

Today almost anything goes when it comes to favors. Couples can chose whatever they like depending on their personal interests. It goes without saying that we love chocolate truffle favors but a typical wedding today may have favors of paper scrolls or bottled maple syrup or wine or tree saplings or key chains or anything their imagination can dream of to show their guests their appreciation.